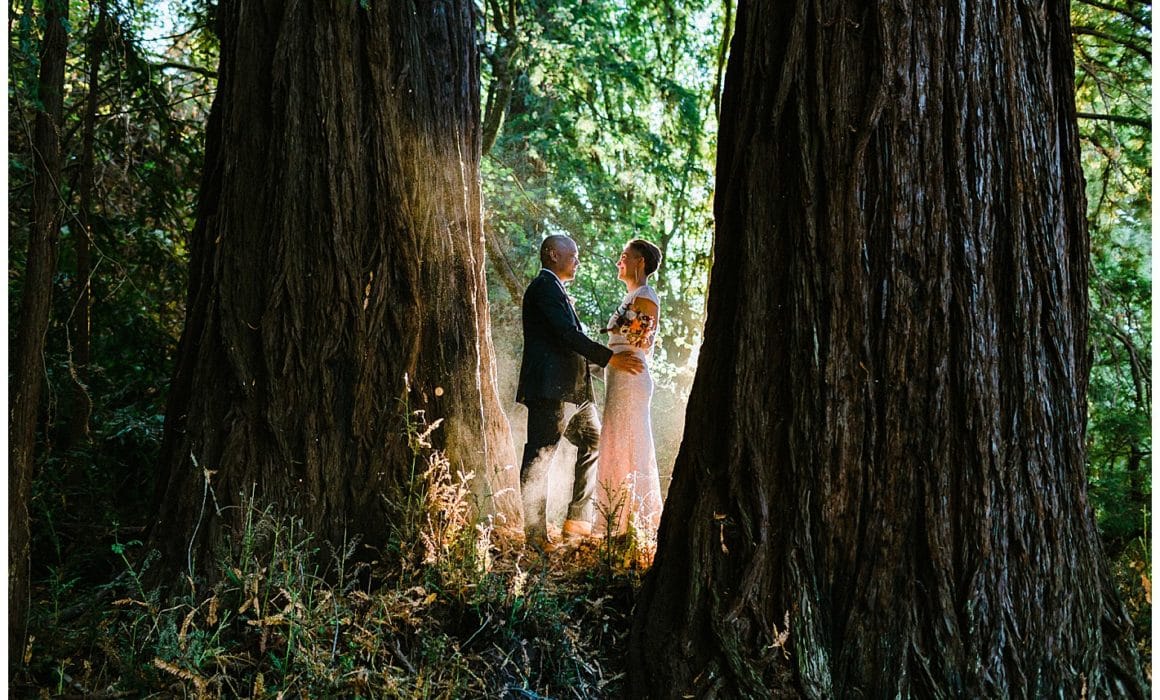 Early November served up a gorgeous, sunny day for Katelyn & Michael’s OVY Camp wedding in San Gregorio, California. As you wind down the dusty road approaching OVY, you can’t help but get that magical feeling of returning to summer camp. We began with a few getting ready photos at a cabin looking out over the dining hall and ball fields. Katelyn switched out her vintage t-shirt for a two-piece wedding top and skirt with motorcycle boots on bottom. Wedding guests had pitched a tent on the deck which gave the space a communal, sleep-over kind of feeling. Cousins and aunts shared mirrors to put finishing touches on their hair. Michael helped his nephews prepare for their roles in the processional and the ceremony.

The ceremony was held in a hidden redwood grove on a whimsical treehouse-cum-altar, built into the trunks of a cluster of redwoods. As the ceremony began, the sun was high in the sky, but the redwoods filtered the light, and made their special type of magic as they are wont to do. Katelyn & Michael were serenaded by a family band with an acapella rendition of a pop song. Michael and Katelyn read personal vows to each other, and as Katelyn was tearing up, somebody passed a tissue on to the altar to Michael, and rather than pass it along to Katelyn, he dried his own tears, and they both broke into laughter.

Directly after the ceremony, a family friend made a panoramic photograph of all the assembled wedding guests. At the cocktail hour Katelyn and Michael passed out challenge coins with symbols of each of their qualities on opposite sides of a coin. The challenge coins were particularly apt as Michael had served in the Marines, and a few of his fellows were in attendance at the wedding

When the sun got a bit lower in the sky and the light got good and juicy, we returned to the redwood grove for couples portraits. And that, I must say, was some of the most delicious light I have ever encountered. For a moment I worried the drama of the light might overpower Katelyn & Michael, but they held their own without a doubt.

Nieces and nephews blew bubbles, chased each other through the ball field, played soccer and basketball. At dawn dinner was distributed from Lamas, a Peruvian food truck; ceviche, lomo saltado, platanos, all scrumptious. Guests gathered around tables in OVY‘s mess hall

Katelyn comes from a family of old-time musicians with West Virginia roots. A friend called a contra dance while Katelyn & Michael danced with their guests. Then the family band convened: Michael on spoons, Katelyn on Banjo, and her dad on stand up bass. Katelyn’s brother called a square dance. Eventually old- time tunes gave way to pop hits, with an emphasis on 80s and 90s throwbacks. Michael’s father danced with his grown daughters.