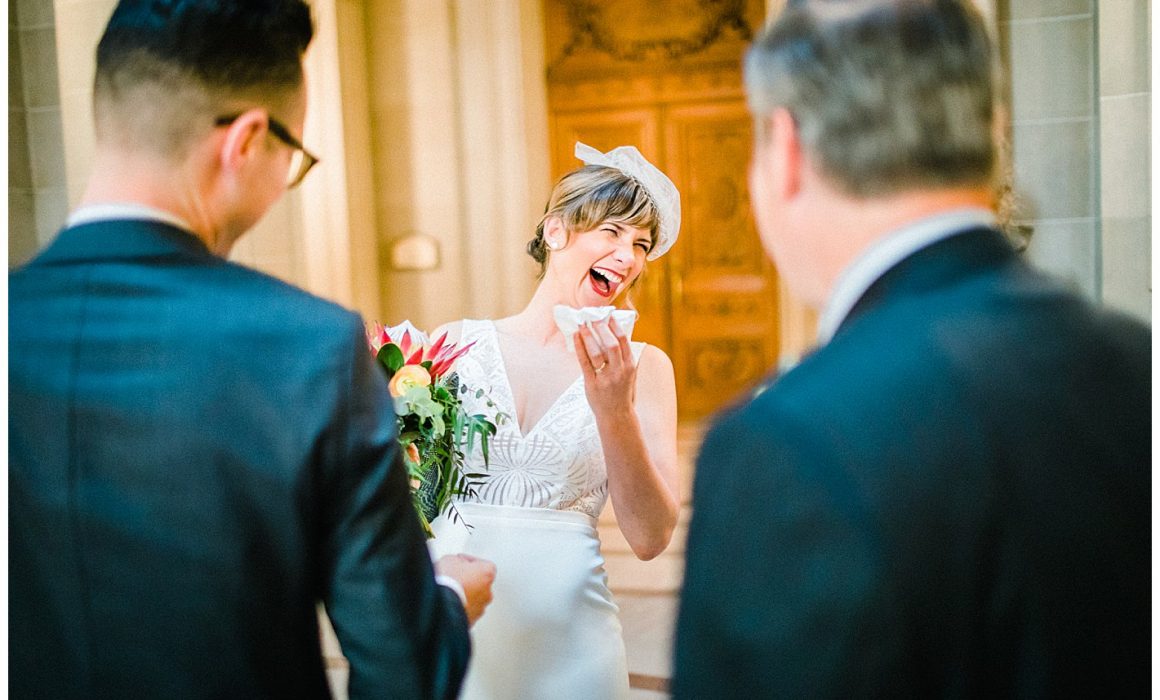 Kathryn & Brian were complete infectious delight from beginning to end. They made each other laugh in every room and hallway and trolley car, and tree shadow, and ocean breeze throughout their wedding day, from San Francisco City Hall, out to Land’s End for portraits, and back to Nopalito for the reception. I had known this was a possibility. We had met up beforehand to think through the wedding timeline over cocktails at the Garden Court in the Palace Hotel, and that had been all laughter from the get go.

Ahhh… San Francisco City Hall, after ten visits to photograph weddings back in those halcyon days of 2019, you strike me an old friend. We hear you are open for weddings again all the way out here in 2021! A sure sign the pandemic is slowing down here in San Francisco.

San Francisco City Hall is a functional space from where the city is governed, but it also tends to feel a bit of a ruin in its age and grandness. Every San Francisco City Hall Wedding is also an exploration of generous halls, and gorgeous light, the sound of oxfords echoing against the marble floors, the coolness of the stone as one leans, shoulder meets tulle meets stone wall. In every corner a brass bust of a mayor of yore . But it is far from ruin alone. As I remember, there was a Zumba class dancing their way to fitness when I arrived for Kathryn & Brian’s wedding.

After the nuptials in the rotunda, we stepped outside into the sun, where more of Kathryn and Brian’s beloveds had gathered for a Hornblower trolley tour of the city. We passed another wedding at the Haas-Lilienthal House which sparked cheering and shouts from trolley to house, and house to trolley. Out at Land’s End we were greeted with lovely light for wedding portraits. As the day unfolded, more and more of Kathryn & Brian’s closest people arrived, first for the trolley tour, and then at Nopalito later in the evening. It total it was a glorious day from start to finish with very little fuss. 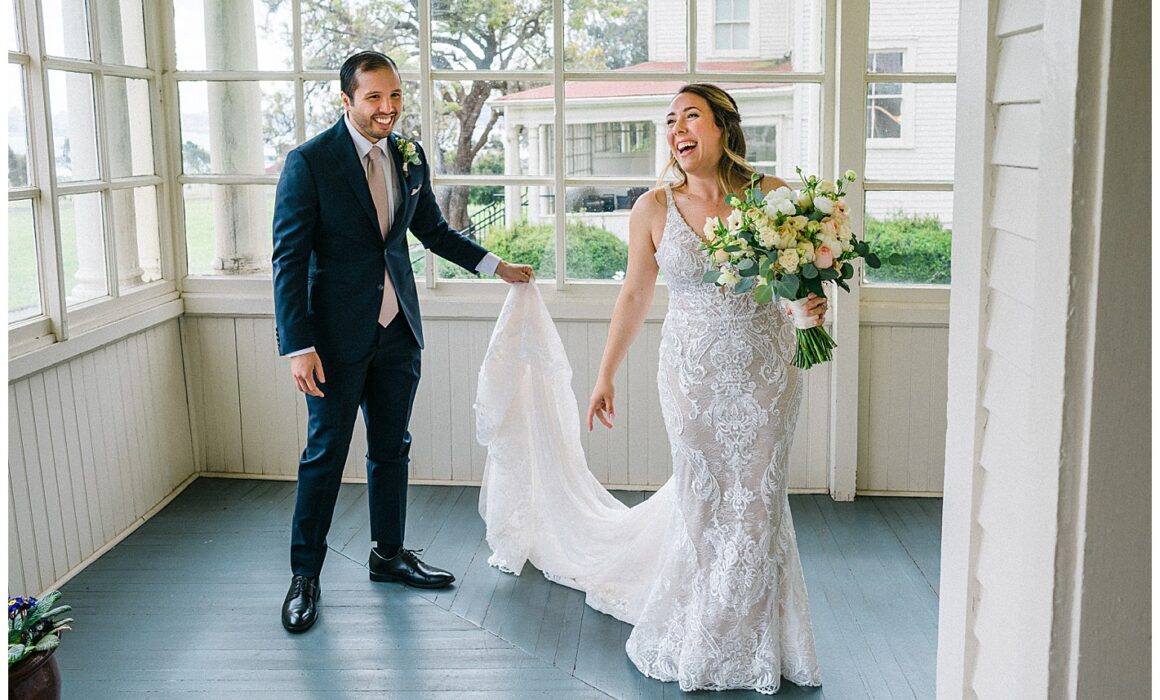 Jessica & David’s intimate wedding unfolded in three parts – Getting ready at Cavallo Point, vows and a big smooch at the Palace of Fine Arts, and portraits in the Music Councourse at Golden Gate Park.

We started the day at Cavallo Point in a lovely old building where Jessica’s sister helped her into her dress and shoes, while her brother helped David with his boutonniere. They had their first look on the sun porch. We walked out to the pier for a few photos with the Golden Gate Bridge, and were lucky enough to be visited by a seagull at just the right moment.

For the wedding at the Palace of Fine Arts click here. 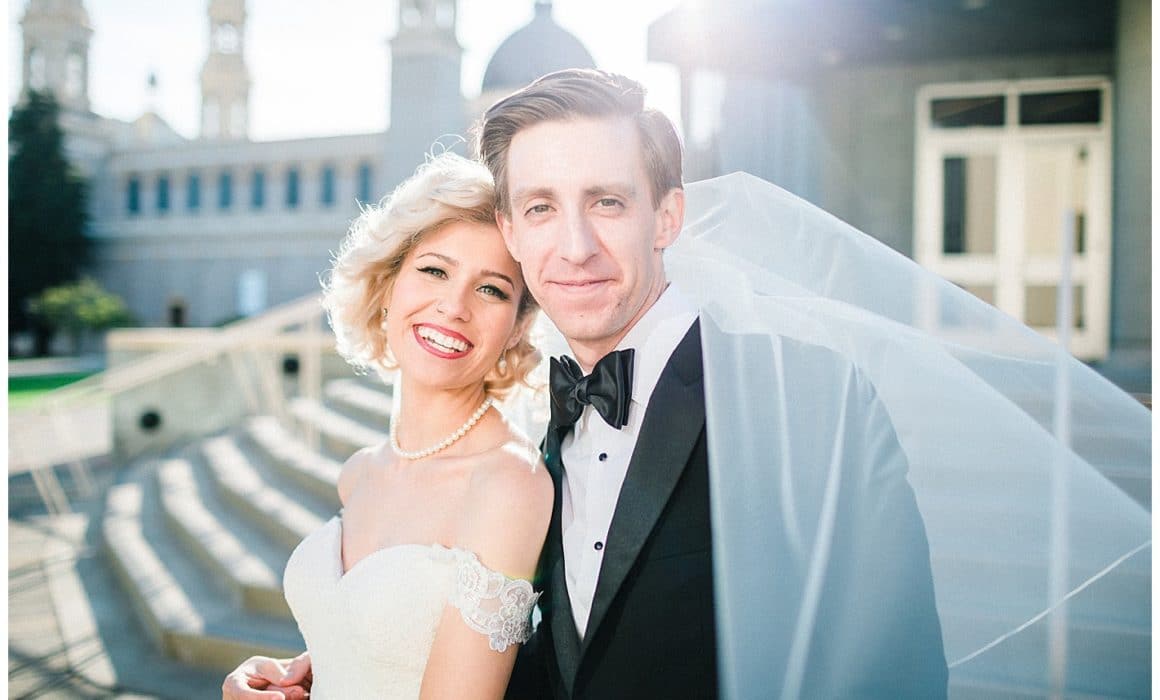 St. Ignatius Cathedral is a stunning building. It’s perched atop one of San Francisco’s numerous hills, so tall you can see it from much of the city. Grandeur is really the right word for St. Ignatius. (Exhibit A: see the photograph of Steff & Quito with St. Ignatius and its towers in the background).

This was a themed wedding: there were details woven throughout the day that referenced the short film “Paperman.” It was no surprise that the wedding was themed, because Steff is a multi-talented costume-designer who has a strong presence on the cosplay scene. She was behind much of the design: her bouquet of roses with a paper airplane marked by a lipstick kiss, the newspaper-themed wedding program, and the color scheme — a sea of black and white, from black tuxes to black oxfords to Steff’s white wedding gown, and then the pop of bright red lipstick on her lips.

Steff & Quito met at University of San Francisco (USF), so this was a return to roots. Quito actually attended St. Ignatius when they were undergrads. We made portraits on the USF campus, where they first fell in love, and up on Lone Mountain with sweeping views of the city. Then we headed across town to the Julia Morgan Ballroom.

I love the photograph of the two of them in the back of the car swallowed in the volume of her dress.

(for part 2 at the Julia Morgan Ballroom click here)

For Part 2 at the Julia Morgan Ballroom, click here. 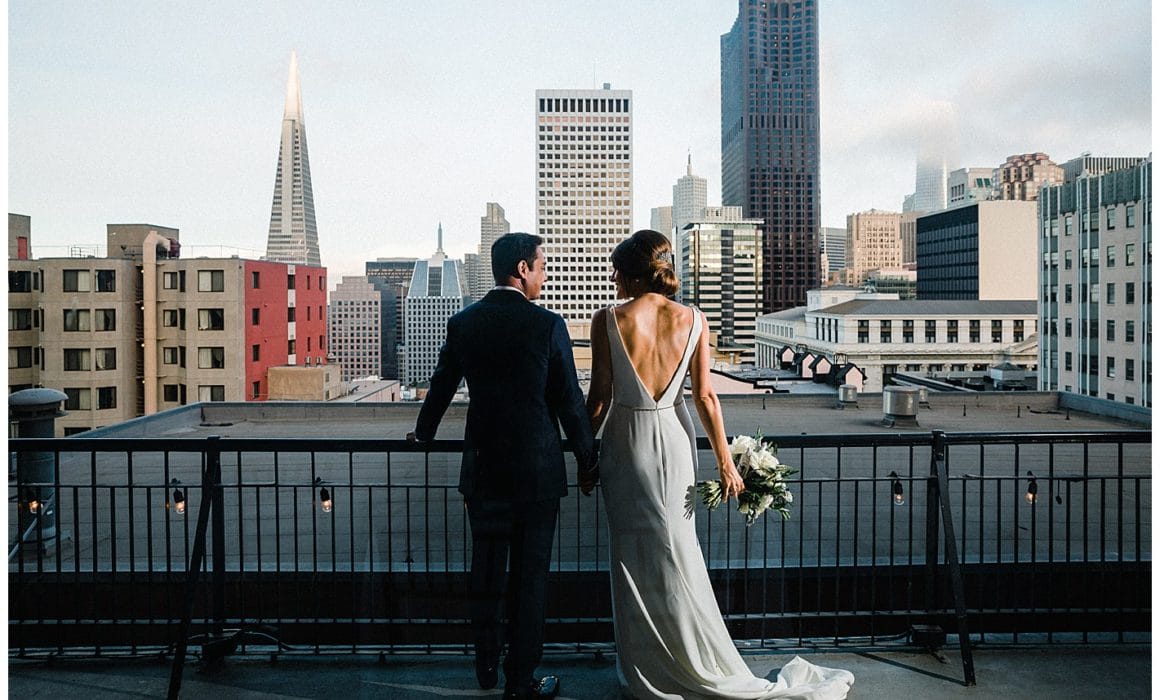 Here are a few moments from Elise and Lionel’s University Club of San Francisco wedding that have stuck with me months after their wedding day:

Elise’s mother weaving the long white veil into her daughter’s hair in that sweet window light.

The luminous red satin map of the world sewn into the interior of Lionel’s custom tux, hinting at the further travels they would make around the world.

The glorious train of Elise’s dress everywhere: as she walked upstairs to meet Lionel at the landing for their first look, then as we walked down the streets of Nob Hill to make portraits, and trailing behind her as she was escorted to the altar by her father.

Their nerves before the ceremony, the particulars of his comforting way, a window into their complimentary natures, the peace and the strength of their life together.

His epic vows full of poetry, as if he had dreamed of reading vows to his beloved all his life, and here he had arrived, there she was, and his words flowed forth.

His niece, the flower girl, her sweetness, her skepticism about this new temporary world the adults have made i.e. the wedding.

The sweet moment they shared in the last light in the University Club’s library after they had been wed.

Her father toasting them, the immediacy of his charisma, and the mirth that flowed into the room.

The University Club’s stunning picture windows revealing the San Francisco skyline, the triangle of the Transamerica building piercing through the fog.

San Francisco’s characteristic purple sunset in the moment when the fog retreated. 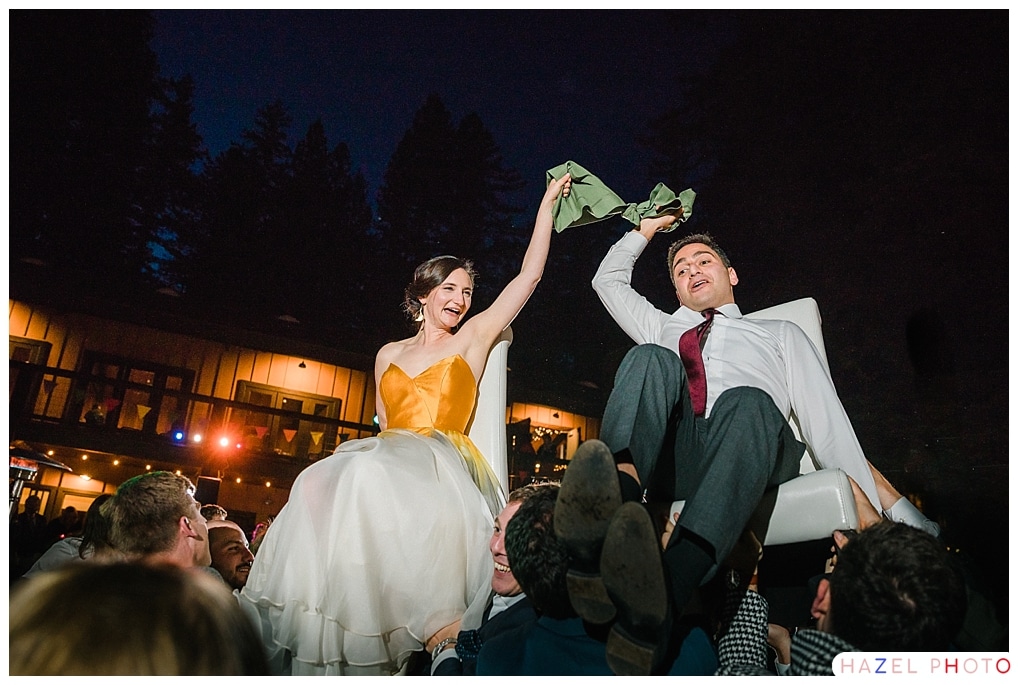 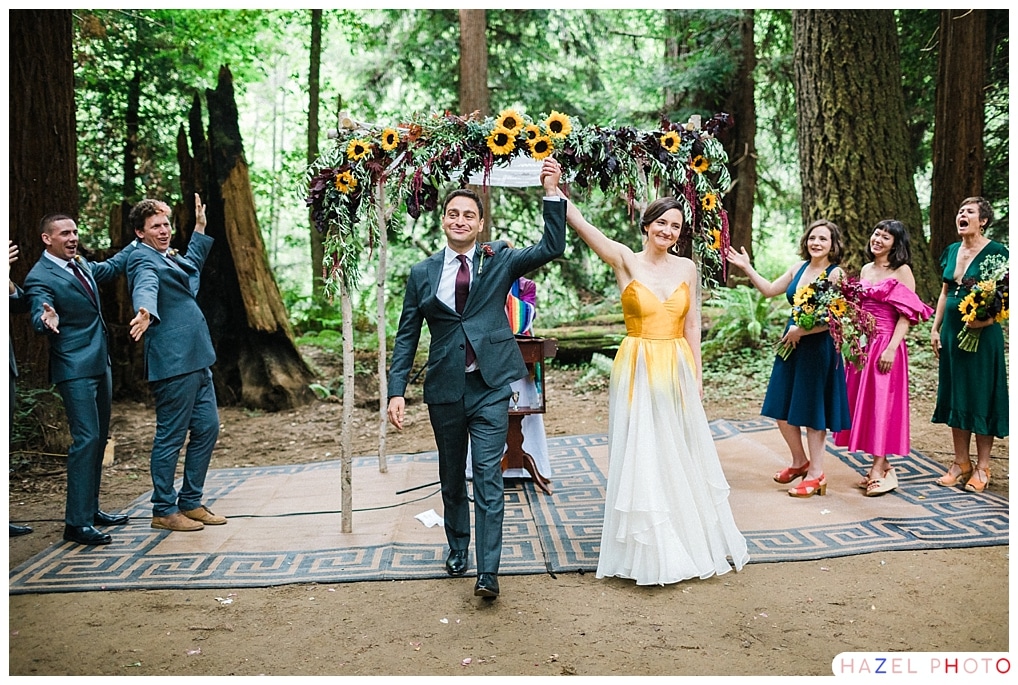